SUMMARY: Breast cancer is the most common cancer among women in the US and about 1 in 8 women (12%) will develop invasive breast cancer during their lifetime. Approximately 268,600 new cases of female breast cancer will be diagnosed in 2019 and about 41,760 women will die of the disease. About 70% of breast tumors express Estrogen Receptors and/or Progesterone Receptors and these patients are often treated with anti-estrogen therapy as first line treatment. However, resistance to hormonal therapy occurs in a majority of the patients.

The PhosphoInositide 3-Kinase (PI3K) pathway is an intracellular signaling pathway important in the regulation of cancer cell proliferation and metastasis. PI3K is a lipid kinase and has four distinct isoforms – alpha, beta, gamma and delta, which play a unique role in the survival of different tumor types and establishment of supportive tumor microenvironments. The alpha and beta isoforms are expressed in a wide variety of tissues whereas the gamma and delta isoforms are primarily expressed in hematopoietic cells such as B and T cells. The PI3K alpha isoform is particularly important in breast cancer and plays an important role in tumorigenesis, supporting tumor angiogenesis and stromal interactions, making this a viable target. PIK3CA is an oncogene that codes for the alpha isoform of PI3K, (PI3Kα), more specifically for the alpha isoform of p110. The PI3k pathway is the most frequently altered pathway in human cancers including breast cancer, and has been implicated in disease progression in a significant number of patients with breast cancer. Activation of the PI3K pathway in breast cancer has been associated with resistance to endocrine therapy and disease progression. Approximately 40% of patients with Hormone Receptor positive (HR+), HER2 negative breast cancers, harbor activating mutations in the PIK3CA isoform of PI3K, which is the most common mutation in HR+ breast cancer. Patients with advanced breast cancer harboring PIK3CA mutations typically have a poor prognosis. This provides a strong rationale for targeting the PI3K pathway in breast cancer. 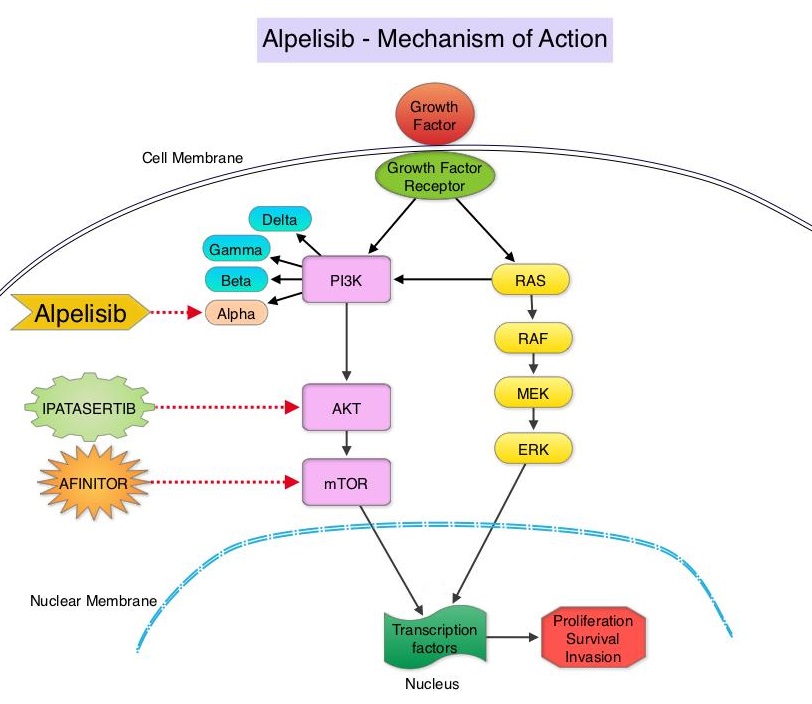 Alpelisib is an oral, alpha-specific PI3K inhibitor that specifically inhibits PIK3 in the PI3K/AKT kinase signaling pathway. Further, it was shown in preclinical studies that cancer cells with PIK3CA mutations are more sensitive to Alpelisib than those without the mutation, across a broad range of tumor types. SOLAR-1 clinical trial was conducted to test this hypothesis.

SOLAR-1 is a global, double-blind, placebo-controlled, randomized phase III trial, which studied the benefit of Alpelisib in combination with FASLODEX® (Fulvestrant) among postmenopausal women and men with PIK3CA-mutated HR+/HER2 negative advanced or metastatic breast cancer, who had progressed on or following prior Aromatase Inhibitor treatment with or without a Cyclin-Dependent Kinase (CDK) 4/6 inhibitor. In this study, 572 patients were randomized in a 1:1 ratio to receive Alpelisib 300 mg orally daily or placebo once daily, in combination with FASLODEX® 500mg IM on days 1 and 15 of the first cycle and day 1 of each subsequent 28-day cycle. Patients were stratified based on visceral metastases and prior CDK4/6 inhibitor treatment. A total of 341 patients had PIK3CA mutations upon testing of the tumor tissue with 169 patients receiving the Alpelisib combination and 172 patients receiving FASLODEX® alone. Enrolled patients had received one or more prior lines of hormonal therapy, but no chemotherapy for advanced breast cancer. They had not previously received FASLODEX® or any PI3K, Akt or mTOR inhibitor, and were not on concurrent anticancer therapy. Approximately half of the patients in each treatment group had lung or liver metastases and 6% had received prior CDK4/6 inhibitor therapy. The Primary endpoint was Progression Free Survival (PFS) for patients with the PIK3CA mutation. Secondary endpoints included Overall Survival (OS), Overall Response Rate (ORR), Clinical Benefit Rate, Health-Related Quality of Life, Efficacy in PIK3CA non-mutant cohort, Safety and Tolerability.

It was concluded that Alpelisib given along with FASLODEX® significantly improved Progression Free Survival compared to Placebo plus FASLODEX®, with manageable toxicities. The authors commented that this is the first study to show statistically significant, clinically meaningful PFS improvement with an alpha-specific PI3K inhibitor in PIK3CA-mutated HR+, HER2 negative advanced breast cancer, highlighting the importance of clinical genomics in advanced breast cancer. It however remains unclear whether Alpelisib should be incorporated into the current treatment paradigm upfront, along with endocrine therapy and a CDK 4/6 inhibitor, or sequentially following disease progression on a combination of endocrine therapy and a CDK 4/6 inhibitor. Alpelisib (ALP) + fulvestrant (FUL) for advanced breast cancer (ABC): results of the phase 3 SOLAR-1 trial. André F, Ciruelos EM, Rubovszky G, et al. Presented during the Presidential Symposium 1 at: 2018 ESMO Congress; October 19-23; Munich, Germany. Abstract LBA3_PR.