SUMMARY: Lung cancer is the second most common cancer in both men and women and accounts for about 13% of all new cancers and 27% of all cancer deaths. The American Cancer Society estimates that for 2017 about 222,500 new cases of lung cancer will be diagnosed and over 155,000 patients will die of the disease. Non Small Cell Lung Cancer (NSCLC) accounts for approximately 85% of all lung cancers. Of the three main subtypes of Non Small Cell Lung Cancer (NSCLC), 25% are Squamous cell carcinomas, 40% are Adenocarcinomas and 10% are Large cell carcinomas. The discovery of rearrangements of the Anaplastic Lymphoma Kinase (ALK) gene in some patients with advanced NSCLC and adenocarcinoma histology, led to the development of agents such as XALKORI® (Crizotinib), ZYKADIA® (Ceritinib), ALECENSA® (Alectinib) and now ALUNBRIG® (Brigatinib), with promising results. It has become clear that appropriate, molecularly targeted therapy for tumors with a molecular abnormality, results in the best outcomes. According to the US Lung Cancer Mutation Consortium (LCMC), two thirds of patients with advanced adenocarcinoma of the lung, have a molecular driver abnormality. The most common oncogenic drivers in patients with advanced adenocarcinoma of the lung are, KRAS in 25%, EGFR in 21% and ALK in 8% as well as other mutations in BRAF, HER2, AKT1 and fusions involving RET and ROS oncogenes. These mutations are mutually exclusive and the presence of two simultaneous mutations, are rare. 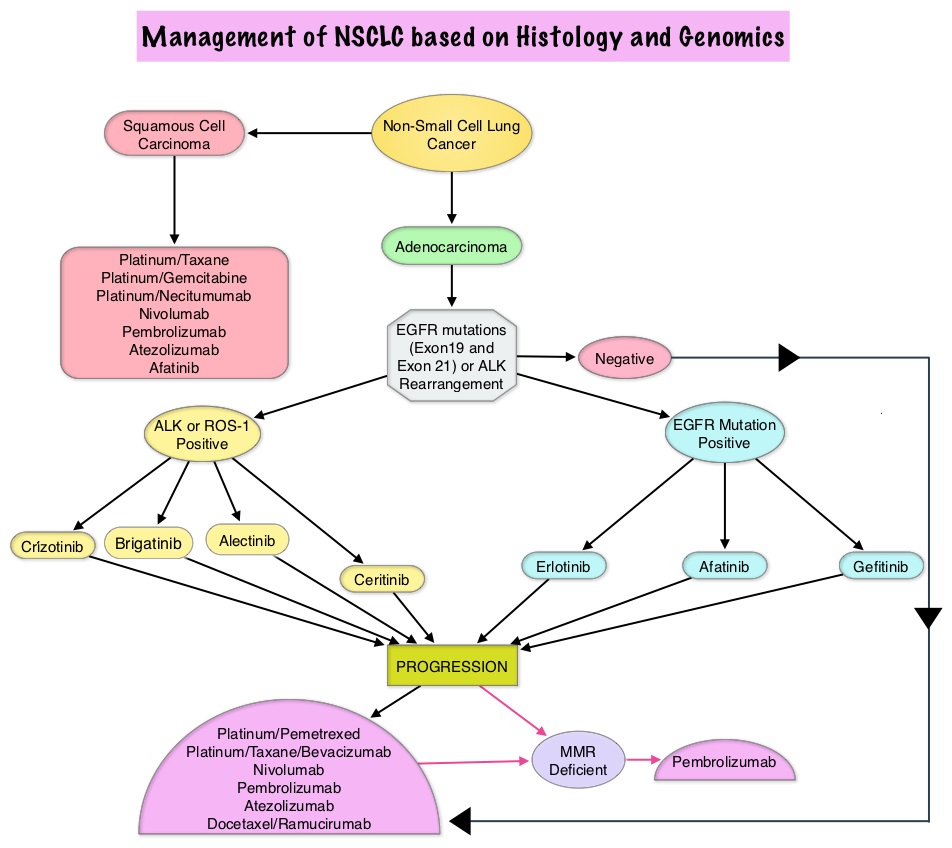 Patients with advanced NSCLC harboring ALK gene rearrangements often receive XALKORI® as first line therapy and can expect a median Progression Free Survival of approximately 11 months. These patients however are at a high lifetime risk of CNS metastases. ALECENSA® (Alectinib) is a potent ALK Tyrosine Kinase Inhibitor, and is effective against several ALK mutations that confer resistance to XALKORI® Further, unlike XALKORI®, ALECENSA® can cross the blood-brain barrier and is not a substrate of P-glycoprotein, a key efflux transporter located at the blood-brain barrier.