SUMMARY: The American Cancer Society estimates that for 2019, about 20,720 new cases of Chronic Lymphocytic Leukemia (CLL) will be diagnosed in the US and 3,930 patients will die of the disease. B-cell CLL is the most common type of leukemia in adults, accounting for about 11% of all hematologic malignancies. The FDA in January 2019 approved IMBRUVICA® (Ibrutinib), a Bruton's Tyrosine Kinase Inhibitor, in combination with GAZYVA® (Obinutuzumab) for treatment-naive patients with CLL/Small Lymphocytic Lymphoma (CLL/SLL). This is the first approval of a non-chemotherapy combination regimen for treatment-naive patients with CLL/SLL.

Chronic Lymphocytic leukemia (CLL) is a disease of the elderly, with a median age at diagnosis of 71 years. Given the age at diagnosis, it is not uncommon for these patients to have multiple comorbidities. GAZYVA® is glycoengineered, fully humanized, third generation, type II anti-CD20 antibody (IgG1 monoclonal antibody) that selectivity binds to the extracellular domain of the CD20 antigen on malignant human B cells. By virtue of binding affinity of the glycoengineered Fc portion of GAZYVA® to Fcγ receptor III on innate immune effector cells such as natural killer cells, macrophages and neutrophils, Antibody-Dependent Cell-mediated Cytotoxicity (ADCC) and Antibody-Dependent Cellular phagocytosis is significantly enhanced, whereas it induces very little Complement-Dependent Cytotoxicity. This is in contrast to RITUXAN® (Rituximab), which is a first generation type I, chimeric anti-CD20 targeted monoclonal antibody that kills CLL cells primarily by Complement-Dependent Cytotoxicity and also ADCC. In a previously published study, the combination of GAZYVA® and LEUKERAN® (Chlorambucil) when given to elderly patients with comorbid conditions improved Overall Survival (OS) compared to LEUKERAN® alone, and resulted in higher Response Rates and longer Progression Free Survival (PFS) than RITUXAN® plus LEUKERAN® (NEJM 2014; 370:1101-1110). 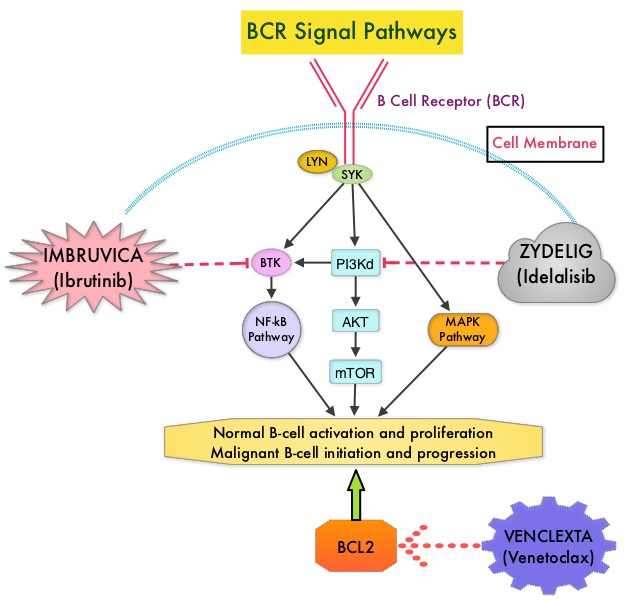 iLLUMINATE is a multicentre, randomized, open-label, international, Phase III trial which enrolled 229 patients with previously untreated CLL or Small Lymphocytic Lymphoma, either aged 65 years or older and if less than 65 years had at least one of the following criteria: Cumulative Illness Rating Scale (CIRS) more than 6, Estimated Creatinine Clearance of less than 70 mL/min using Cockcroft-Gault equation or del 17p by FISH or TP53 mutation by PCR or Next Generation Sequencing. (CIRS is a tool utilized to assess and quantify burden of comorbidity in individual patients). Patients were randomly assigned 1:1 to receive IMBRUVICA® plus GAZYVA® (N=113) or LEUKERAN® plus GAZYVA® (N=116). IMBRUVICA® plus GAZYVA® regimen consisted of IMBRUVICA® 420 mg PO once daily continuously combined with GAZYVA® 100 mg IV on day 1, 900 mg IV on day 2, 1000 mg IV on day 8, and 15 of cycle 1 and 1000 mg IV on day 1 of subsequent 28-day cycles, for a total of six cycles. LEUKERAN® plus GAZYVA® regimen consisted of LEUKERAN® 0.5 mg/kg PO on days 1 and 15 of each 28-day cycle for six cycles combined with GAZYVA® regimen as described above. Eighty percent (80%) of patients were 65 years or older and the median age was 71 years. Approximately 65% of patients had high-risk genetic abnormalities, 52% of patients had either Rai III or IV disease, with bulky disease at baseline in 27% of IMBRUVICA®-treated patients and 38% of LEUKERAN® treated patients. The Primary Endpoint was Progression Free Survival (PFS) and Secondary endpoints included PFS in High-risk Subpopulation which included those patients with del17p/TP53 mutation or del 11q deletion at baseline and/or unmutated IGHV disease. Patients who progressed on the LEUKERAN®treatment group were allowed by the IRC (Independent Review Committee) to cross over to the IMBRUVICA® treatment group.

It was concluded that a combination of IMBRUVICA® and GAZYVA® is a safe and effective chemotherapy-free regimen for previously untreated patients with CLL or Small Lymphocytic Lymphoma, independent of high-risk features, and provides an alternative first line treatment option for this patient group. Ibrutinib plus obinutuzumab versus chlorambucil plus obinutuzumab in first-line treatment of chronic lymphocytic leukaemia (iLLUMINATE): a multicentre, randomised, open-label, phase 3 trial. Moreno C, Greil R, Demirkan F, et al. Lancet Oncol. 2019;20:43-56.