SUMMARY: The FDA on June 22, 2017 granted regular approvals to TAFINLAR® ((Dabrafenib) and MEKINIST® (Trametinib) administered in combination, for patients with metastatic Non Small Cell Lung Cancer (NSCLC) with BRAF V600E mutation, as detected by an FDA-approved test. These are the first FDA approvals specifically for treatment of patients with BRAF V600E mutation-positive metastatic NSCLC. The FDA also approved the Oncomine® Dx Target Test (Thermo Fisher Scientific), a Next Generation Sequencing (NGS) test to detect multiple gene mutations for lung cancer in a single test from a single tissue specimen. This test detects the presence of BRAF, ROS1, and EGFR gene mutations or alterations in tumor tissue of patients with NSCLC. This test can be used to select patients with NSCLC with the BRAF V600E mutation for treatment with the combination of TAFINLAR® and MEKINIST®. This is the first NGS oncology panel test approved by the FDA for multiple companion diagnostic indications. Lung cancer is the second most common cancer in both men and women and accounts for about 13% of all new cancers and 27% of all cancer deaths. The American Cancer Society estimates that for 2017 about 222,500 new cases of lung cancer will be diagnosed and over 155,000 patients will die of the disease. Lung cancer is the leading cause of cancer-related mortality in the United States. 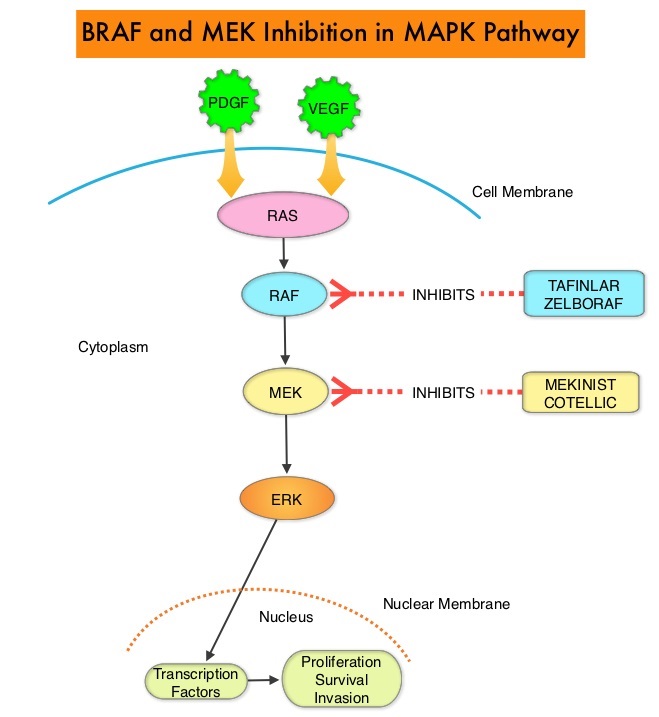 The approval of the combination of MEKINIST® (Trametinib) and TAFINLAR® (Dabrafenib), to treat patients with advanced NSCLC, was based on the understanding of the biological pathways of this malignancy. The Mitogen-Activated Protein Kinase pathway (MAPK pathway) is an important signaling pathway which enables the cell to respond to external stimuli. This pathway plays a dual role, regulating cytokine production and participating in cytokine dependent signaling cascade. The MAPK pathway of interest is the RAS-RAF-MEK-ERK pathway. The RAF family of kinases includes ARAF, BRAF and CRAF signaling molecules. BRAF is a very important intermediary of the RAS-RAF-MEK-ERK pathway. BRAF mutations have been demonstrated in 6%-8% of all malignancies and BRAF V600E mutation occurs in 1-2% of lung adenocarcinomas and acts as an oncogenic driver.

BRF113928 is an open-label, multicohort, multicentre, non-randomized, phase II study which sequentially enrolled patients with BRAF V600E mutation-positive metastatic NSCLC, across 3 cohorts. The first 2 cohorts included previously treated patients. The median age was 64 years, 98% had adenocarcinoma, and majority of patients (72%) were former or current smokers. In the first cohort, 84 patients received single agent TAFINLAR® following one or more prior platinum-based chemotherapy. In the second cohort, 57 patients received a combination of TAFINLAR® 150 mg orally twice daily and MEKINIST® 2 mg orally once daily. Patients in this second cohort had received at least 1 prior line of platinum-based chemotherapy regimen with disease progression and 33% had received 2 or more prior chemotherapy regimens.

It was noted that in these previously treated cohorts of patients, the Objective Response Rate (ORR) for the combination treatment based on independent review was 63%, with a median Duration of Response (DoR) of 12.6 months. The ORR for patients who received single agent TAFINLAR® was 27% and the median DoR was 9.9 months. The investigator assessed median Progression Free Survival (PFS) was 10.2 months, and median Overall Survival (OS) was 18.2 months.

The authors in this latest publication reported the the efficacy and safety of TAFINLAR® plus MEKINIST® treatment in previously untreated patients with BRAF V600E-mutant metastatic NSCLC (third cohort). This cohort enrolled 36 patients and patients received TAFINLAR® 150 mg orally twice daily plus MEKINIST® 2 mg orally once daily, until disease progression or unacceptable toxicities. The median follow up was 15.9 months. The Primary endpoint was investigator assessed ORR. Secondary endpoints included Duration of Response (DoR), PFS, OS, and safety.

The Objective Response Rate in this cohort was 64%, with 6% Complete Response and 58% Partial Response. The Disease Control Rate was 75%. The median Duration of Response was 10.4 months, median PFS was 10.9 months and median OS was 24.6 months. The most common grade 3 or 4 adverse events were pyrexia, liver function abnormalities, hypertension and vomiting.