SUMMARY: The FDA on July 10, 2018, granted accelerated approval to YERVOY® (Ipilimumab) for use in combination with OPDIVO® (Nivolumab), for the treatment of patients 12 years of age and older with MicroSatellite Instability-High (MSI-H) or MisMatch Repair deficient (dMMR) metastatic ColoRectal Cancer, that has progressed following treatment with a Fluoropyrimidine, Oxaliplatin, and Irinotecan. The FDA in July, 2017, granted accelerated approval to single agent OPDIVO® (Nivolumab) for treatment of this same group of patients. ColoRectal Cancer (CRC) is the third most common cancer diagnosed in both men and women in the United States. The American Cancer Society estimates that approximately 140,250 new cases of CRC will be diagnosed in the United States in 2018 and about 50,630 patients are expected to die of the disease. The lifetime risk of developing CRC is about 1 in 21 (4.7%).

The DNA MisMatchRepair (MMR) system is responsible for molecular surveillance and works as an editing tool that identifies errors within the microsatellite regions of DNA and removes them. Defective MMR system leads to MSI (Micro Satellite Instability) and hypermutation, triggering an enhanced antitumor immune response. MSI (Micro Satellite Instability) is therefore a hallmark of defective/deficient DNA MisMatchRepair (dMMR) system and occurs in 15% of all colorectal cancers. Defective MisMatchRepair can be a sporadic or heritable event. Approximately 65% of the MSI tumors are sporadic and when sporadic, the DNA MisMatchRepair gene is MLH1. Defective MisMatchRepair can also manifest as a germline mutation occurring in 1 of the 4 MisMatchRepair genes which include MLH1, MSH2, MSH6, PMS2. This produces Lynch Syndrome (Hereditary Nonpolyposis Colorectal Carcinoma – HNPCC), an Autosomal Dominant disorder and is the most common form of hereditary colon cancer, accounting for 35% of the MSI colorectal cancers. MSI tumors tend to have better outcomes and this has been attributed to the abundance of tumor infiltrating lymphocytes in these tumors from increase immunogenicity. These tumors therefore are susceptible to blockade with immune checkpoint inhibitors. MSI (Micro Satellite Instability) testing is performed using a PCR based assay and MSI-High refers to instability at 2 or more of the 5 mononucleotide repeat markers and MSI-Low refers to instability at 1 of the 5 markers. Patients are considered Micro Satellite Stable (MSS) if no instability occurs. MSI-L and MSS are grouped together because MSI-L tumors are uncommon and behave similar to MSS tumors. Tumors considered MSI-H have deficiency of one or more of the DNA MisMatchRepair genes. MMR gene deficiency can be detected by ImmunoHistoChemistry (IHC). MLH1 gene is often lost in association with PMS2. NCCN Guidelines recommend MMR or MSI testing for all patients with a history of Colon or Rectal cancer. 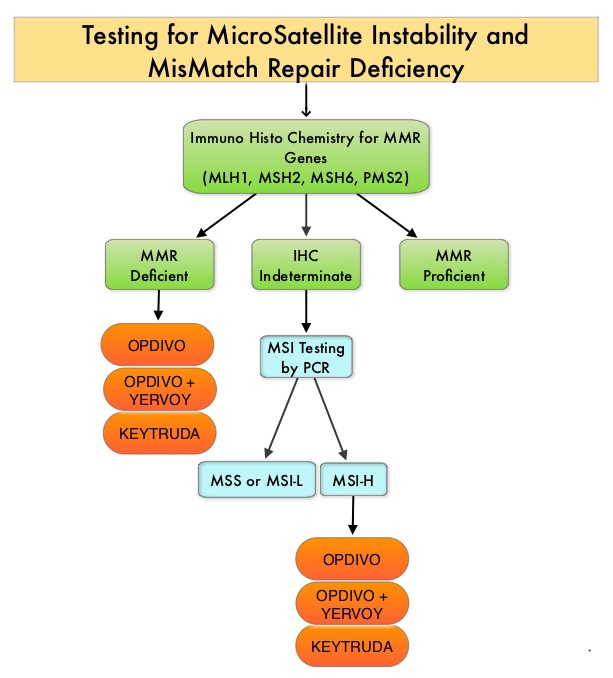 This new FDA approval was based on data from the ongoing CheckMate-142, which is a multicenter, open-label, phase II trial, designed to determine within the dMMR/MSI-H population, whether OPDIVO® alone or in combination with another checkpoint inhibitor YERVOY®, could result in meaningful responses in patients with metastatic CRC, following at least one prior line of therapy. This study was not designed to compare the outcomes in cohorts receiving single agent OPDIVO® and combination checkpoint inhibitors. The rationale behind combining OPDIVO® a PD-1 inhibitor and YERVOY®, a CTLA-4 inhibitor, was based on the synergy between these two agents, to promote T-cell antitumor activity, thereby improving upon single-agent activity of OPDIVO®.

This study enrolled 74 patients, who received single agent OPDIVO® 3 mg/kg IV every 2 weeks and 119 patients who received OPDIVO® 3 mg/kg IV plus YERVOY® 1 mg/kg IV, every 3 weeks for four doses, followed by OPDIVO® 3 mg/kg as a single agent every 2 weeks, until unacceptable toxicity or radiographic progression. In this study, from a cohort of 119 patients with MSI-H or dMMR mCRC, 82 patients received prior treatment with a Fluoropyrimidine, Oxaliplatin, and Irinotecan. Among the cohort of 119 patients receiving OPDIVO® plus YERVOY®, the median age was 58 years, 29% had a known history of Lynch syndrome, 24% had BRAF mutations, 37% had KRAS mutations and 22% of patients had high PD-L1 expression (1% or more) on tumor cells at baseline. Primary tumor location was in the right colon in 55% of patients, 25% had left and sigmoid colon disease and 13% had primary tumor in the transverse colon. Seventy six percent (76%) of patients had two or more prior lines of therapy. The Primary end point was investigator-assessed ORR (Overall Response Rate) and Secondary end points included DCR (Disease Control Rate – CR, PR, or stable disease) Safety and tolerability, PFS (Progression Free Survival) and OS (Overall Survival).

At median follow-up of 13.4 months, the ORR in those patients receiving OPDIVO® plus YERVOY®, was 55% and the Disease Control Rate for 12 or more weeks was 80%. Median duration of response was not reached and 94% of the responses were ongoing at data cutoff. PFS and OS rates at 1 year were 71% and 85%, respectively. Further, clinically meaningful and statistically significant improvements were observed in patient-reported outcomes, including functioning, symptoms, and quality of life. Approximately 13% of patients who discontinued treatment because of toxicities still had an ORR of 63%, consistent with that of the overall population. Grade 3 to 4 toxicities occurred in 32% of patients and were manageable. Indirect comparisons in this nonrandomized CheckMate-142 trial suggested that OPDIVO® plus YERVOY® provided numerically higher response rates and improved long term clinical benefit relative to OPDIVO® monotherapy.

It was concluded that OPDIVO® plus YERVOY® results in a high response rates, encouraging PFS and OS at 12 months, with manageable toxicities. These data from the CheckMate-142 study support the use of OPDIVO® as a single agent or in combination with YERVOY®, for the treatment of patients with previously treated dMMR/MSI-H metastatic CRC. Durable Clinical Benefit With Nivolumab Plus Ipilimumab in DNA Mismatch Repair–Deficient/Microsatellite Instability–High Metastatic Colorectal Cancer. Overman MJ, Lonardi S, Wong KYM, et al. J Clin Oncol. 2018;36:773-779