SUMMARY: The FDA on January 12, 2018, granted regular approval to LYNPARZA® (Olaparib), a Poly ADP-Ribose Polymerase (PARP) inhibitor, for the treatment of patients with deleterious or suspected deleterious germline BRCA-mutated (gBRCAm), HER2-negative metastatic breast cancer, who have been treated with chemotherapy either in the neoadjuvant, adjuvant, or metastatic setting. This is the first FDA-approved treatment for patients with gBRCAm HER2-negative metastatic breast cancer. Patients with Hormone Receptor (HR) positive breast cancer should have been treated with a prior endocrine therapy or be considered inappropriate for endocrine treatment. Patients must be selected for therapy based on an FDA-approved companion diagnostic for LYNPARZA®.

Breast cancer is the most common cancer among women in the US and about 1 in 8 women (12%) will develop invasive breast cancer during their lifetime. Approximately, 266,120 new cases of invasive breast cancer are expected to be diagnosed in 2018 and about 40,920 women are expected to die of the disease. DNA can be damaged due to errors during its replication or as a result of environmental exposure to ultraviolet radiation from the sun or other toxins. The tumor suppressor genes such as BRCA1 (Breast Cancer 1) and BRCA2 help repair damaged DNA and thus play an important role in maintaining cellular genetic integrity, failing which these genetic aberrations can result in malignancies. The BRCA1 gene is located on the long (q) arm of chromosome 17 whereas BRCA2 is located on the long arm of chromosome 13. Mutations in BRCA1 and BRCA2 account for about 20 to 25 percent of hereditary breast cancers and about 5 to 10 percent of all breast cancers. These mutations can be inherited from either of the parents and a child has a 50 percent chance of inheriting this mutation and the deleterious effects of the mutations are seen even when an individual’s second copy of the gene is normal. 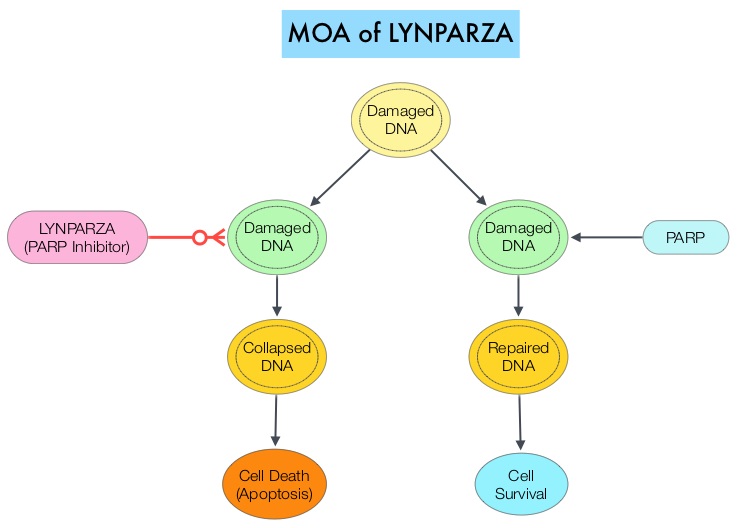 The PARP (Poly ADP Ribose Polymerase) family of enzymes, which include PARP1 and PARP2 repair damaged DNA. LYNPARZA® is a PARP enzyme inhibitor that causes cell death in tumors that already have a DNA repair defect, such as those with BRCA1 and BRCA2 mutations. The FDA approved LYNPARZA® in 2014 as monotherapy for the treatment of patients with deleterious or suspected deleterious germline BRCA mutated advanced ovarian cancer.

The present approval was based on data from OlympiAD, a randomized, open-label, phase III study that evaluated the efficacy and safety of LYNPARZA® compared with physician’s choice of standard single agent chemotherapy, in patients with HER2-negative metastatic breast cancer, with inherited, germline BRCA mutations. In this study, 302 patients were randomized in a 2:1 ratio to receive LYNPARZA® tablets 300 mg PO BID (N=205) or physician’s choice of standard chemotherapy (N=97). The later included 21-day cycles of either XELODA® (Capecitabine) 2500 mg/m2 orally on days 1-14, NAVELBINE® (Vinorelbine) 30 mg/m2 IV days 1 and 8 or HALAVEN® (Eribulin)1.4 mg/m2 IV days 1 and 8. Treatment was continued until disease progression or unacceptable toxicity. The median age was 44 years, and all patients had received prior chemotherapy in the neoadjuvant, adjuvant, or metastatic setting. Patients in this study were stratified based on prior use of chemotherapy for metastatic disease, Hormone Receptor status (HR positive versus triple negative), and previous use of platinum-based chemotherapy. The Primary endpoint was Progression Free Survival (PFS). Secondary endpoints included Overall Survival (OS), time to second progression or death, Objective Response Rate (ORR) and effect on health-related Quality of Life.