COPIKTRA® is a first-in-class novel, oral, dual inhibitor of PhosphoInositide 3-Kinase (PI3K)-delta and PI3K-gamma, two enzymes/isoforms known to help support the growth and survival of malignant B-cells and T-cells. PI3K-delta is constitutively expressed in hematologic malignancies and its inhibition has been shown to reduce the proliferation and survival of malignant leukemia and lymphoma cells, while allowing normal immune cell survival. Inhibiting PI3K-gamma impairs the function of cancer-supportive macrophages and T cells, which sustain leukemia and lymphoma cells in a protective tumor microenvironment. This broader dual inhibition may provide greater benefit than inhibiting just one isoform alone, by significantly inhibiting chemokines from both cancer cells and the tumor microenvironment. 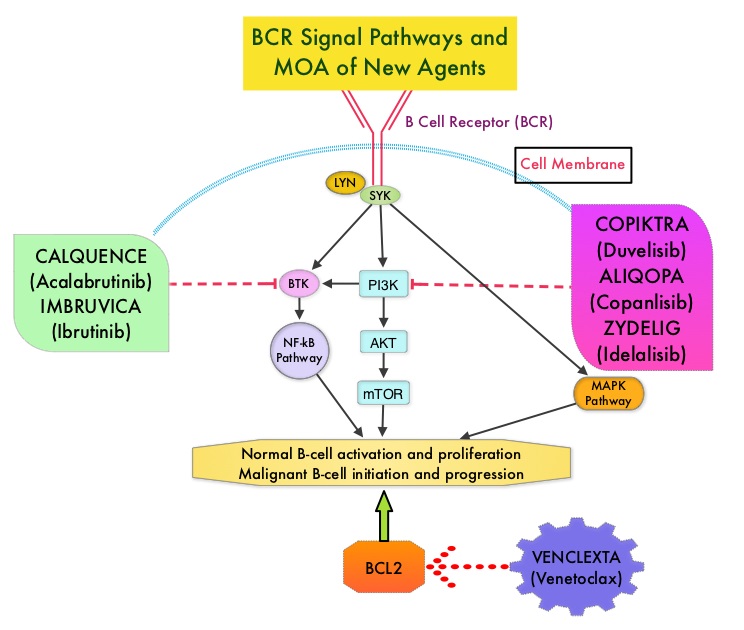 DUO Trial is a randomized, multicenter, open-label, Phase III study in which COPIKTRA® was compared to ARZERRA® (Ofatumumab), in patients with Relapsed or Refractory CLL or SLL. This study randomized 319 patients in a 1:1 ratio to receive either COPIKTRA® 25 mg orally twice daily or ARZERRA®. ARZERRA® was administered at an initial dose of 300 mg IV, followed one week later by 2000 mg once weekly for 7 doses, and then 2000 mg once every 4 weeks for 4 additional doses. The median age was 69 years and 23% of patients had tumors with 17p deletion. All patients received Pneumocystis prophylaxis while on treatment. The Primary endpoint was Progression Free Survival (PFS) and Secondary endpoints included Overall Response Rate (ORR), Duration of Response (DOR) and Overall Survival (OS). The FDA approval of COPIKTRA® for CLL and SLL was based on a subset of these 319 patients (N=196), with CLL or SLL, who had received at least 2 prior therapies. In this subset, 95 patients were randomized to the COPIKTRA® group and 101 patients to ARZERRA® group. The estimated median PFS as assessed by an Independent Review Committee (IRC), was 16.4 months in the COPIKTRA® group and 9.1 months in the ARZERRA® group (HR=0.40). The Overall Response Rate (ORR) per IRC was 78% and 39% for the COPIKTRA® and ARZERRA® arms, respectively.

The accelerated approval for Follicular Lymphoma was based on a single-arm, multicenter, Phase II monotherapy study (DYNAMO Trial), in patients with refractory, indolent Non-Hodgkin Lymphoma. In this study, 83 patients with Follicular Lymphoma who were refractory to RITUXAN® (Rituximab) and to either chemotherapy or radioimmunotherapy, were enrolled. The median age was 64 years, 37% had bulky disease with lesions 5 cm or more and 81% were refractory to 2 or more prior lines of therapy. The ORR determined by an IRC, was 42%, with 41% of patients experiencing Partial Responses and one patient having a Complete Response. Of the 35 responding patients, 43% maintained responses for at least 6 months and 17% maintained responses for at least 12 months. The most common adverse reactions were nausea, diarrhea or colitis, anemia, neutropenia, rash, fatigue, fever, cough, upper respiratory infection, pneumonia and musculoskeletal pain.

It was concluded that monotherapy with COPIKTRA® is an effective oral treatment option for patients with Relapsed or Refractory CLL/SLL and Follicular Lymphoma and addresses an unmet need for patients who have limited options, once they have progressed after two prior therapies. https://www.fda.gov/Drugs/InformationOnDrugs/ApprovedDrugs/ucm621503.htm