SUMMARY: Breast cancer is the most common cancer among women in the US and about 1 in 8 women (12%) will develop invasive breast cancer during their lifetime. It is estimated that 252,710 new cases of invasive breast cancer and 63,410 new cases of non-invasive breast cancer will be diagnosed in women in 2017 and 40,610 women are expected to die from the disease. Benign Breast Disease (BBD) is an important risk factor for the later development of breast cancer in either breast. With the routine use of mammography, the identification of BBD has become more common, and this has in turn enabled the calculation of breast cancer risk. The Breast Cancer Risk Assessment Tool which is an interactive tool designed by researchers at the National Cancer Institute (NCI) and the National Surgical Adjuvant Breast and Bowel Project (NSABP) to estimate a woman's risk of developing invasive breast cancer, utilizes the number of breast biopsies and atypical hyperplasia, in addition to other factors, to estimate women’s risk of developing breast cancer. Benign Breast Disease (BBD) encompasses a variety of histologic entities. FibroCystic Changes (FCCs) constitute the most frequent benign disorder of the breast. FCCs may be multifocal and bilateral and women usually present with symptoms of breast pain and tender nodularities in breasts. Hormonal imbalance, with estrogen predominance over progesterone, has been implicated as an important contributing factor in its development. Fibrocystic changes are usually subdivided into nonproliferative lesions, proliferative lesions without atypia, and proliferative lesions with atypia (atypical hyperplasia). Proliferative or atypical lesions are associated with an increased risk of breast cancer. However a significant majority of breast biopsies (about 70%) show nonproliferative lesions. 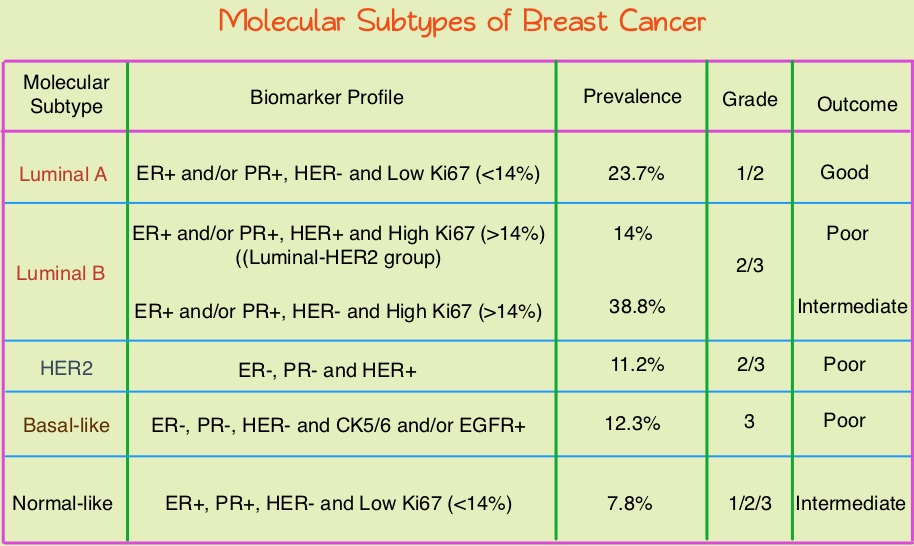 Breast cancer is heterogeneous malignancy and using global gene expression analyses, 6 breast cancer intrinsic subtypes have been established. They include Luminal A, Luminal B, HER2-enriched, Claudin-low, Basal-like, and a Normal breast-like group. Triple Negative Breast Cancer (TNBC) accounts for 12–24% of all breast carcinomas and is negative for Estrogen Receptor (ER), Progesterone Receptor (PR), and HER2. There is a 2 fold increase in the incidence of TNBC among African American (AA) women compared with White American (WA) women and is a surrogate for the inherently aggressive Basal-like breast cancer subtype. This group has the worse prognosis compared to other breast cancer subtypes. Basal-like breast cancer sub-type is also a marker of hereditary breast cancer susceptibility. Multiparity may increase the risk of TNBC and reduce the likelihood of developing ER-positive breast cancer. Triple Negative Breast Cancer (TNBC) compared with non-TNBC, likely arises from different pathogenetic pathways. NF-κB pathway, which controls immune response, angiogenesis, the cell cycle, extracellular matrix degradation, and apoptosis, may represent a key regulator of TNBC. Activation of PI3K/AKT pathway in turn, has been implicated in oncogenic transformation.

Benign breast disease (BBD) has been associated with increased risk for ER positive/non-TNBC. The purpose of this study was to determine whether African American (AA) identity is associated with TNBC among a cohort of both AA and White American (WA) women, who were initially diagnosed with BBD. The authors in this study conducted a retrospective analysis of a cohort comprising 2588 African American women and 3566 White American women aged between 40 and 70 years, with a biopsy-proven Benign Breast Disease. This data was obtained from the Pathology Information System of Henry Ford Health System (HFHS), an integrated multihospital and multispecialty health care system in Detroit, Michigan. These individuals had breast biopsies performed between January 1, 1994, and December 31, 2005 and data analysis was performed from November 1, 2015, to June 15, 2016. Patients with prior breast cancer and those with breast cancer diagnosed within 6 months of BBD biopsy were excluded. Benign Breast Disease was classified as fibrocystic/proliferative/hyperplasia without atypia, with atypia, or with lobular carcinoma in situ. The mean follow up was 10.2 years for both AA patients and WA patients.