The FDA on December 1, 2020 approved GAVRETO®, for adult and pediatric patients 12 years of age and older with advanced or metastatic RET-mutant Medullary Thyroid Cancer (MTC) who require systemic therapy, or RET fusion-positive thyroid cancer who require systemic therapy and who are Radioactive Iodine-refractory (if Radioactive Iodine is appropriate). GAVRETO® is a product of Blueprint Medicines Corporation.

SUMMARY: The FDA on May 8, 2020, granted accelerated approval to RETEVMO® (Selpercatinib) for patients with metastatic RET fusion-positive Non-Small Cell Lung Cancer (NSCLC), patients with advanced or metastatic RET-mutant Medullary Thyroid Cancer (MTC) who require systemic therapy and those with advanced or metastatic RET fusion-positive thyroid cancer who require systemic therapy and who are RadioActive Iodine (RAI)-refractory. Lung cancer is the second most common cancer in both men and women and accounts for about 14% of all new cancers and 27% of all cancer deaths. The American Cancer Society estimates that for 2020, about 228, 820 new cases of lung cancer will be diagnosed and 135,720 patients will die of the disease. Lung cancer is the leading cause of cancer-related mortality in the United States. Non-Small Cell Lung Cancer (NSCLC) accounts for approximately 85% of all lung cancers. 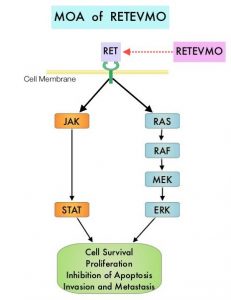 RET kinase is a transmembrane Receptor Tyrosine Kinase and plays an important role during the development and maintenance of a variety of tissues, including neural and genitourinary tissues. RET signaling activates downstream pathways such as JAK/STAT3 and RAS/RAF/MEK/ERK and leads to cellular proliferation, survival, invasion, and metastasis. Oncogenic alterations to the RET proto-oncogene results in uncontrolled cell growth and enhanced tumor invasiveness. RET alterations include RET rearrangements, leading to RET fusions, and activating point mutations occurring across multiple tumor types. RET fusions have been identified in approximately 2% of NSCLCs, 10-20% of non-medullary thyroid cancers. Activating RET point mutations account for approximately 60% of sporadic Medullary Thyroid Cancers (MTC) and more than 90% of inherited MTCs. Other cancers with documented RET alterations include colorectal, breast, and several hematologic malignancies.

The LIBRETTO-001 is the largest open-label, multicenter, Phase I/II trial in patients with advanced solid tumors, including RET fusion-positive solid tumors, RET-mutant Medullary Thyroid Cancers, and other tumors with RET activation, treated with a RET inhibitor. To investigate the efficacy of RETEVMO®, the trial was conducted in 2 parts: Phase 1 (dose escalation) and Phase II (dose expansion). Patients with advanced cancer were eligible, if they have progressed on or were intolerant to available standard therapies, or no standard or available curative therapy existed, or in the opinion of the Investigator, they would be unlikely to tolerate or derive significant clinical benefit from appropriate standard of care therapy, or they declined standard therapy. A dose of 160 mg BID was the recommended Phase II dose. Up to about 850 patients with advanced solid tumors harboring a RET gene alteration in tumor and/or blood were enrolled in 6 different Phase II cohorts, based on tumor type, RET alteration and prior therapy. Identification of RET gene alterations was prospectively determined in local laboratories using either Next Generation Sequencing, Polymerase Chain Reaction, or Fluorescence In Situ Hybridization. The Phase II portion of the trial had a Primary endpoint of Objective Response Rate (ORR) and Secondary endpoints of Duration of Response, Progression Free Survival (PFS) and safety.

LIBRETTO-001 is the largest trial ever reported in RET-altered cancer patients, and the present FDA approval of RETEVMO® for patients with RET fusions and mutations, across multiple tumor types, represents an important milestone in the Precision Medicine arena.

The FDA on May 8, 2020, granted accelerated approval to RETEVMO® for the following indications:

3) Adult and pediatric patients 12 years of age or older with advanced or metastatic RET fusion-positive thyroid cancer who require systemic therapy, and who are Radioactive Iodine-refractory (if Radioactive Iodine is appropriate).

RETEVMO® is a product of Eli Lilly and Company.

The FDA on November 29, 2012 approved COMETRIQ® for the treatment of patients with progressive metastatic medullary thyroid cancer (MTC). COMETRIQ®  is a small molecule that inhibits the activity of multiple tyrosine kinases, including RET, MET, and VEGF receptor 2. COMETRIQ® is available in capsule form and is a product of  Exelixis, Inc.

Medullary Thyroid Cancer accounts for about 6% of all thyroid cancers. This cancer originates from the parafollicular cells, also called C cells, of the thyroid. Calcitonin is a hormone produced by the C cells. For this reason, measuring serum calcitonin following complete resection of Medullary Thyroid Carcinoma can be helpful in diagnosing recurrent disease.

There is presently no active treatment approved by the FDA,  for the treatment of advanced Medullary Thyroid Carcinoma (MTC). A new oral Tyrosine Kinase Inhibitor (Vandetanib) has shown promising results and may soon become available. This agent is a dual inhibitor and targets the epidermal growth factor receptor (EGFR) and vascular endothelial growth factor receptor (VEGFR). It also appears to inhibit RET-tyrosine kinase activity, an important  driver of cell growth in MTC.

Results from a double blind phase III trial (ZETA study) presented at ASCO 2010, showed that treatment with Vandetanib significantly extended progression free survival with a 54% reduction in the rate of disease progression compared to placebo.

Vandetanib (Zactima) is very likely to be studied in other solid tumors given its ability to target multiple receptors. Stay Tuned.